The History of Highlands Inn

The high plateau on which Highlands stands remained remote during the early days of Macon County’s history. Samuel Truman Kelsey and Clinton Carter Hutchinson of Reno County, Kansas selected the plateau for the development of a new town. They arrived at the site of their new town on February 1875, purchased 839 acres and began development and promotion of the area. It was to be called Kelsey’s Plateau but the name was soon changed to Highlands.

Joseph Halleck built Highlands Inn in 1880 as the first hotel in Highlands, known as Highlands House. In 1883 Joseph Fitts bought the inn and was running it when the Moccasin War took place in 1885. In 1886 John Jay and Mary Chapin Smith were the recipients of the Inn, a wedding present, from Mary Chapin’s aunt, Eliza Wheaton. During this era, the Inn was known as the Highlands House and fondly referred to as Smith House.

One of the earliest photographs of the Inn shows bewildered guests gazing over the dusty, earthen Main Street as a group of elephants calmly walked by. It was all part of a visiting circus that somehow made it up the mountain trail. Also, included in all known photographs of the inn is the Maple tree on the corner of 4th & Main Street. This tree is known to Highlanders as the “Signal” tree as it is the first tree to begin the fall color. 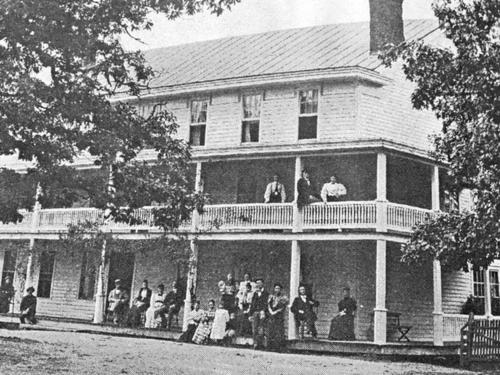 The Inn became known as Highlands Inn around 1925 after Frank Cook purchased it. Miss Helen Major, a Canadian by birth, bought the Inn in 1969. She lived in the inn (in the room now named “Miss Majors”) and ran it full time. Miss Majors had a passion for popcorn and to this day you can occasionally smell the unmistakable aroma of popcorn.

Sometime in the 1970’s the inn was renovated and enlarged on the back to create fourteen more rooms. In 1989 Rip and Pat Benton bought the inn. They began an extensive renovation. The history of the Inn was researched and was restored as closely as possible to the “Country Manor” it once was. There are antique furnishings, colonial paints, wall coverings, as well as stenciling by a master stenciling artist. In 1991 the Highlands Inn was listed on the National Registry of Historic Places.

The new millennium brought new owners with deep roots in Highlands. In the year 2000 Sabrina and Bill Hawkins,? bought the Highlands Inn. The Hawkins family was among the original settlers of Highlands. Bill’s great-grandfather, Alfred Hawkins, relocated from Ohio too and settled the wilderness south of Highlands, known as Horse Cove. He became the areas, first doctor.

In 2005 Highlands Inn celebrated its 125th anniversary with a gala fundraiser for the Highlands Historical Society.

In the winter of 2006, the stage was removed from the theater room and was beautifully renovated to become The Sequoah Room, Highlands’ premier banquet, and meeting space. The renovation was done by Highlands designer Chad Lucas.