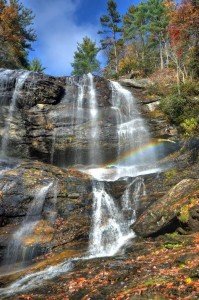 The unique mountain town of Highlands, NC with its rich history, wonderful climate, and enviable way of life, is located in the Blue Ridge Mountains of southwestern North Carolina. The area borders on the states of South Carolina and Georgia.

Highlands stands tall in the high country. The town’s elevation of 4,118 feet makes it one of the highest incorporated towns east of the Mississippi River. The area sits snugly on a plateau about 5 miles long and 3 1/2 miles wide. The surrounding area boasts 47 peaks of 4000′ mountains soaring to heights of over 5,000′. During the month of July, our average temperature is a cool 77 degrees. Enveloped by the Nantahala National Forest, the Highlands Plateau is botanically and geographically one of the most unique locations in the entire world.

The high elevation of the region produces on of the highest average rainfall rates in the US, approximately 95″ per year. There are over 200 springs just within the Highlands city limits. The ultimate result is a series of incomparable rivers and streams. Among the jewels finding there origins in this area are the Chattooga National Wild and Scenic River, the Horsepasture National Wild and Scenic River, the ruggedly majestic Cullasaja River and the Whitewater River.

Perhaps the best know of the natural attractions are the waterfalls, and this region is absolutely second to none in this regard. Literally hundreds of impressive falls lace the region. Of special note is Whitewater Falls, the tallest in the eastern US at 411 feet.

Scores of hiking trails for any level of expertise crisscross the area. One easy hike is the two-mile trek to the summit of Whiteside Mountain, considered by some geologists to be the oldest mountain in the world.

If fishing is your thing, you’ll find over 500 miles of fishing streams in Macon County alone, and the trout fishing here is as good as it gets. Other wildlife abounds, including whitetail deer, black bear, and the gray squirrels. Birdwatchers will be pleased to know that over 180 species have been observed here, including the rare Golden Eagle and Peregrine Falcon.

Founded as a summer resort in 1875 by Samuel T. Kelsey and Clinton C. Hutchinson, Highlands has from its beginning been a haven for southerners anxious to escape the summer heat. The altitude and the climate offer a comfortable retreat from the fast pace of city life. As a renewal point for professionals and executives, Highlands is an ideal location for a summer home.

The year round population of the Highlands area is about 3000 while in the summer the population increases to about 20,000 folks. The cultural amenities that Highlands has to offer during the summer season are legion. Entertainment includes live theatre, chamber music concerts, and wine dinners. Many educational seminars and informative lectures are an integral part of the summer season.